In December of 2017, the Tax Cuts and Jobs Act (the Act) was signed into law by President Trump. The Act is the largest tax reform that Congress has passed in the last thirty years. A few of the items in the Act stand to have a significant impact on the craft brewing industry. Below, we have identified some of the key provisions that were passed and will have an impact on small and independent brewers.

The CBMTRA was incorporated in the tax reform law and went into effect on January 1, 2018. It will sunset on December 31, 2019.

For all other brewers and beer importers, the federal excise tax has been reduced from $18 per barrel to $16 per barrel on the first 6 million barrels. The current rate of $18 per barrel will be retained for barrels over 6 million.

Under the Act, breweries are allowed to immediately expense capital investments such as brewing equipment. The maximum amount of Section 179 that taxpayers can expense increased from $500,000 to $1 million; and the phase-out threshold increased from $2.07 million to $2.5 million. These tax provisions will expire in 2025.

Prior to the reform, breweries could generally deduct 9% of related brewery taxable income under the DPAD provisions. Under the Act, DPAD is repealed for tax years beginning after December 31, 2017.

With the new tax law in effect, breweries stand to be significantly impacted by the Act. We strongly urge you to speak with your tax advisor before acting on any of the information contained in this article.  Should you have any questions, please do not hesitate to contact BSSF today 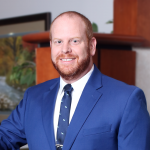 Matthew S. Fox, CPA is a Principal with Brown Schultz Sheridan & Fritz (BSSF) and a key member of the Firm’s Tax Department. He received his Bachelor of Science degree in Accounting from Pennsylvania State University. Matt has over 15 years of public accounting experience. He leads the Craft Beverage Group at BSSF, specializes in Research & Development (R&D) Tax Credit consulting and serves a variety of industries including craft beverage, insurance, construction, real estate, manufacturing and financial services.